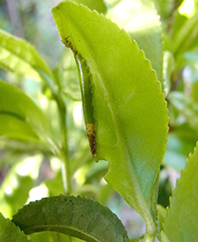 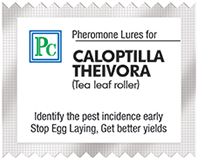 (Tea leaf roller)– This pest gives a serious damage to the tea plant as rolling the young leaves.

Adult is a microlepidopteran with long antenna, golden iridescent patches in forewing and abdomen. The wingspan is 10–14 mm.

The tea leaf roller, Caloptilia theivor, belonging to the family Gracillariidae in the order Lepidoptera, is a serious pest of tea plants. The larvae feed on Tea leaves. They mine the leaves of their host plant. The mine is found on the underside of the leaf. They sneak the tender leaf or roll the young leaves into triquetrous insect buds for hiding themselves and feeding. The fecal particles accumulated in the insect buds, causing pollution to the leaves and influenceing the tea quality. Contamination of this rolled leaves deteriorates the qualities of manufactured tea. The decrease of production is caused by the fourth and fifth instar in the leaf rolling stage.

The larva mines the tender leaf and reaches leaf margin during the first two instars, the mine beginning as a gallery and widening into a blotch. In the third and later instars it rolls the end of the leaf downwards creating a cone, in which frass accumulates, two or three successive cones are formed, usually at the tip of a leaf; the downward curling of the leaf distinguishes this species from Tortiricid leaf-rollers.

ETL for Caloptilia theivora is 15–20 No’s of moths per trap per day.
Use 8-10 No’s Pheromone Traps per acre from 15 days crop stage to control pest at early stage.
Trap canopy should be placed one feet above crop canopy to achieve optimum catch.